Megan Dixon was interviewing for a job at a steakhouse in Leceister called Miller and Carter. She received a confirmation that she would be attending via text so she confirmed, headed to the interview and did her best.

Shortly after the interview was over her phone buzzed and she received a surprising message. “It’s a no” was all it said from the person who conducted her interview.

Surprised by the method of rejection, she replied “Okay. How come?” so she could perhaps get some insight as to where she went wrong but the answer she got was truly unexpected. 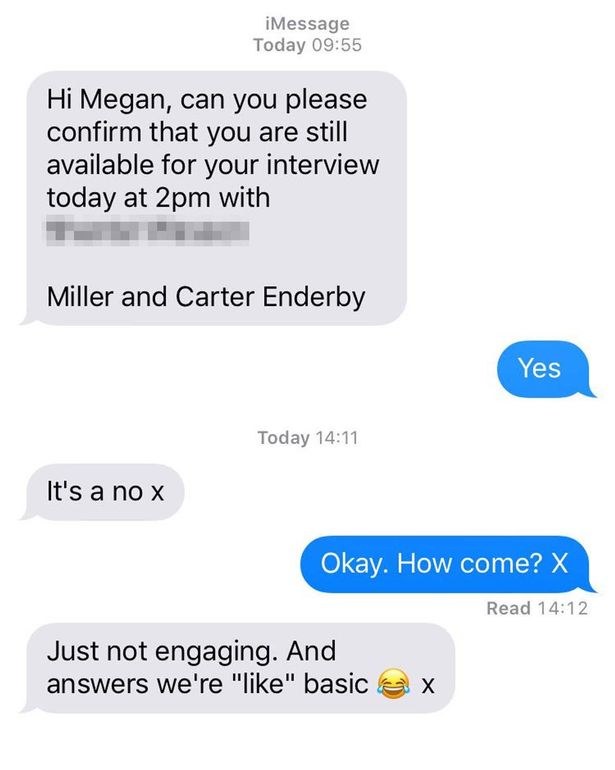 The reply said that she was “just not engaging. And answers we’re “like” basic” with a laughing crying emoji. That is a pretty brutal way to tell someone they didn’t get a job. Turns out there was a bit more to the story.

Megan was interviewed by a woman named Shantell who apparently was unprepared for the interview and had her phone buzzing throughout the interview.

The restaurant has responded to the incident after Megan shared it on Twitter and received all kinds of support from friends and strangers vowing not the visit the establishment.

“We can’t apologize enough to Megan. It was never our intention to be disrespectful or upset her in any way. The texts were sent in error and were intended for our manager, not the candidate.” – Spokesperson for Miller and Carter

What do you think about this incident? Is there anything the company should do to make it up for this?